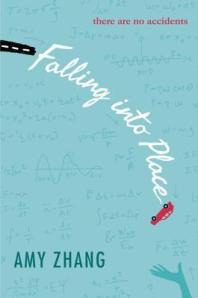 Liz Emerson is one of the most popular girls in school, and from the outside it seems like she lives the perfect life. However, she secretly is suffering on the inside and is afraid to ask for help. Instead, she decides to leave her life entirely and plans to drive her car off the road and make it look like an accident. What she didn’t count on was that she wouldn’t be killed instantly, but would instead survive and be taken to the hospital in critical condition, where the doctors say the only way she will survive is if she wants to keep fighting to live.

This was a really powerful story that reminded me a bit of Gayle Forman’s If I Stay. However in this story, Liz was purposely trying to kill herself, and instead of the story being told from her point of view it is actually told by a narrator who isn’t identified until the end of the book. The narration jumps back and forth between the narrator watching Liz’s friends and family in the days after the accident and flashbacks of what Liz’s life was like before the accident and how everything led up to that point.

Liz’s father died when she was very young and her mother works a job that keeps her traveling most of the time so Liz spends most of her time alone. This is definitely a big factor contributing to her depression, and leads to her reckless behavior like drinking and driving erratically. It seems that Liz does things like that just to avoid being bored and alone with her own thoughts. What depresses Liz most of all is herself–she has an extreme case of self-loathing and feels that by killing herself she is making the world better. Liz’s hatred of herself comes from the way she treats people–she acts like a mean girl most of the time at school, messing up the lives of those who wrong her even in the slightest way, and then once she realizes how much she hurts people she regrets it and hates herself for what she has done.

The sad thing is that you can see how much Liz is trying to hint that she needs help, especially during the last week of her life. Everyone is so consumed with their own lives or they think that because Liz is rich and popular her life is therefore perfect, and this blinds them to what is really going on. The only one who watches Liz and seems to care about getting to know the real Liz Emerson is Liam, a boy from a different crowd at school who is the first to see Liz’s accident and call the police.

Overall, Falling into Place was a powerful story that was difficult to put down. I am still in awe of the fact that Amy Zhang is still a high school student and she was able to write this amazing book!

Falling into Place will be released on September 9, 2014.

One thought on “Falling into Place by Amy Zhang”