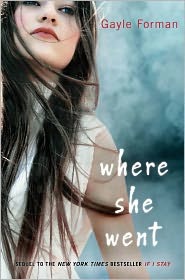 WARNING: SPOILERS AHEAD FOR IF I STAY

Where She Went takes place three years after If I Stay and is told from Adam’s point of view. Adam and Mia have been apart for nearly three years now and their lives have gone in different directions. Adam has used their breakup as the driving force behind his music, which subsequently led to his success as a rock star. Mia went to Julliard and is now playing concerts at all the biggest venues. Right before Adam is supposed to leave for a tour in Europe, he and Mia run into each other in New York City for the first time in three years.

This book had a very different tone from the first book. Adam is very angry and depressed after all he has been through with Mia. He still loves her and is upset at how their breakup went, and he is depressed because even though he achieved everything he wanted to career-wise, he absolutely hates his career. He has fought to keep Mia’s name out of the press but unfortunately he can never get her completely out of his own head.

Where She Went is told in a similar fashion as If I Stay, alternating between current time and flashbacks. Through the flashbacks we learn what happened after Mia got out of the hospital and how their relationship began to decline when she moved to New York, and we also get to see how Adam’s career took off and what he has done since Mia left. What is hard for Adam also is that he constantly had to be there for Mia after she lost her family in the accident, but what many people didn’t realize was that he loved them as well so he was also hurting badly after their deaths and had nobody to comfort him.

When Adam and Mia meet up after all this time, it is awkward for them both at first. Adam is still angry with Mia for how she left things and isn’t entirely sure what spending time with her will result in. They are both leaving for different countries the next day–Adam to England and Mia to Japan–and know that they have only this one night to fix whatever went wrong between them and have closure. The direction that this book took was very interesting and I was definitely surprised at the way it ended.

Overall, Where She Went was a great follow up to If I Stay. I liked getting Adam’s perspective and it was interesting to see how much Mia’s family’s accident affected so many lives.

Where She Went was released on April 1, 2011 and is the second book in the If I Stay series.