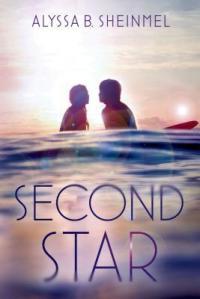 Wendy Darling’s brothers Michael and John disappeared one day, and her parents have basically decided that they were killed in a surfing accident. Wendy doesn’t believe them and decides to go and look for them herself. What she finds is a hidden cove inhabited by runaways where the waves are always perfect and everyone is always surfing. She becomes torn between two of the runaways–Pete, who has his own band of runaways that he protects, and Jas, Pete’s nemesis and a drug dealer on the other side of the cove.

I was excited to read this because it was the first retelling of Peter Pan that I have come across. Unfortunately, it was also really disappointing. First of all, Wendy is the most blah main character ever. I felt absolutely no connection to her and she made the dumbest decisions and then wondered how she ended up in such bad situations. After months and months she just decides to go out looking for her brothers, who she still believes are alive. This didn’t make sense to me–if she was so sure that they were alive, why would she want to find them after they’ve put she and her parents through hell? Anyway, she goes out on her own and thinks for some reason she can do better than the entirety of the California law enforcement, and when she comes across the hidden cove called Kensington, things begin to get really bad.

She meets Pete, who is obviously the reinvented Peter Pan, and who is nothing like the original. He’s kind of a jerk who keeps secrets from Wendy yet for some reason after knowing her only a few hours can’t bear to have her leave. Wendy of course develops her own insta-love for Pete, even though they have basically no chemistry and barely know each other. Belle, who is obviously the reinvented Tinkerbell, was the only character who seemed to develop a bit throughout the book, but her character was still very cliche–the typical jealous ex-girlfriend who wants to make Wendy’s life miserable.

But it gets even worse: Wendy develops insta-love for another character–Jas, who is basically the Captain Hook of the story yet personality wise is a much better guy than Pete. Wendy goes from being head over heels for Pete to being head over heels for Jas so quick that it is obviously she has no idea what she really feels for anyone. The story then takes a twist near the end that I’m sure was supposed to wow the reader but basically made me angry because it was so ridiculous.

Overall, Second Star was a huge disappointment due to too much insta-love, underdeveloped characters, and a horrible ending.

One thought on “Second Star by Alyssa B. Sheinmel”