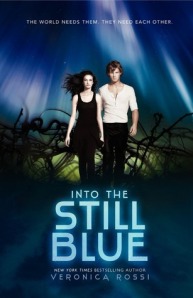 Perry and Aria have to figure out a way to save the Dwellers and the rest of Perry’s tribe by bringing them into the Still Blue. However, now that Sable and Hess have teamed up, it seems almost impossible that Aria and Perry will be able to save their people. First, they must rescue Cinder, because he is the only one that can help them get to the Still Blue, even though it means sacrificing himself to save them all.

I really enjoyed this series overall. Aria and Perry have grown so much since the first book, both individually and as a couple. They finally have learned how they best complement each other, and that they cannot stop the other from fighting alongside them. Their relationship allows them to help the Dwellers and the Outsiders see past their differences and help each other to survive.

One of my favorite things about this series is Roar and Aria’s relationship. This was so well done by Rossi–Aria and Roar are able to have a very close friendship without it being at all romantic or love triangle-y. The two of them have a great relationship and after the loss of Liv it is even more important that Roar have someone like Aria by his side.

The ending to this series was somewhat predictable, but I like the way it was executed. Once again, the dual narration worked well, especially towards the end. I really loved how strong Aria has become, especially outside of her home, and how she has truly become part of both the Dwellers and the Outsiders.

Overall, Into the Still Blue was a great ending to the series! I’m sad that this series had to end, and while the ending was somewhat predictable, I enjoyed the way it was done.

2 thoughts on “Into the Still Blue by Veronica Rossi”