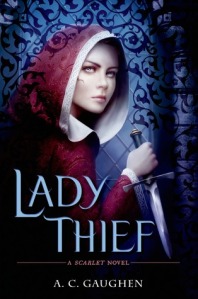 “Your power, your great gift, is that you never give up.“

Scarlet was forced to reveal her true identity and marry Lord Gisbourne in front of all of Nottingham. She despises Gisbourne, who is cruel and manipulative, and is actually in love with Robin Hood. She and Robin want to find a way to be together, but first she must figure out how to get her marriage annulled. But as the royal court comes to Nottingham to appoint a new sheriff, Scarlet realizes that there are even bigger things to worry about than her forced marriage.

This was a really great sequel to Scarlet, and in my opinion was even better than the first book! Scarlet and Robin are in a much different place in this book–Scarlet is upset about her marriage to Gisbourne, and Robin is suffering from PTSD after being held prisoner and tortured. He is trying not to let it affect his relationship with Scarlet, but it keeps getting worse and worse. Then when Gisbourne arrives to blackmail Scarlet, she is forced to leave Robin anyway.

Gisbourne tells Scarlet that if she behaves like a noblewoman and stays by his side while the royal court is in Nottingham, he will annul their marriage when it is all over. Scarlet is torn, because while she does not trust Gisbourne to hold his word, she is willing to do almost anything to annul her marriage so that she can be with Robin. When she goes to stay in the castle with Gisbourne, we get a bigger glimpse into his character and the reasons behind his cruelty.

Scarlet is such a great heroine. She has the amazing ability to never give up, despite how dire her circumstances seem. She always has a backup plan, and is able to get herself out of the worst situations. She doesn’t let the fact that she is small and female stop her from doing anything and she is willing to do almost anything to keep the people of Nottingham safe.

This book had even more twists and turns than the first one. I did not anticipate the ending at all, and I can’t wait to see how the events of this book will affect Scarlet and Robin in the next one!

Overall, Lady Thief was a great sequel to Scarlet, and was full of action and suspense. I can’t wait to read what happens next!