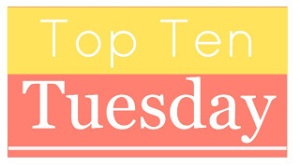 Top Ten Tuesdays is a weekly meme hosted by The Broke and the Bookish! Today’s theme is books that you wish had sequels. Unfortunately I was only able to come up with six this week because it seems like nearly every book I read lately actually does have a sequel in the works! Here’s my top six in no particular order:

1. This is Not a Test by Courtney Summers–This was such a fabulous standalone book, but the ending was left a little bit up in the air and I would love to know what actually happened afterwards. Plus, the writing was so beautiful that I would probably read anything Courtney Summers writes!

2. The Dark and Hollow Places by Carrie Ryan–Okay, so this is cheating a bit since this is already a sequel, or rather a sequel to a sequel. I loved the way this book ended but this series was one of my favorites and I would love to read many more books about this world.

3. Kill Me Softly by Sarah Cross–This was a bunch of fairy tale retellings in one story and it seemed to me that the ending was left open for a possible sequel. So far I haven’t heard any news about one, but I would definitely read it if Sarah Cross decided to write it!

4. Every Day by David Levithan–This was such a great book and I loved A’s character. I would love to see how the rest of his life turned out and if he ever found the answers he was looking for.

5. The Girl Who Could Fly by Victoria Forester–I read this years and years ago so I don’t remember much of it, but I do remember that when I read the end of the book I felt like there was definitely a hint that there might be a sequel. However, many years later, there is no such book and I find myself still wishing there was!

6. Bitterblue by Kristin Cashore–I know, this is already a sequel, but I am a huge fan of the Graceling world and would love to read more about it. Plus, I really loved Bitterblue and I would love to see how she is doing after everything that happened in the last book.

Which books made your Top Ten this week? Are there any books that have sequels that you wish didn’t?

One thought on “Top Ten Books I Wish Had Sequels”