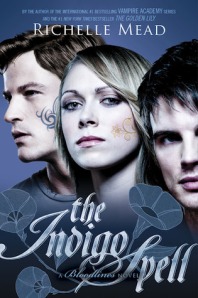 “’Any life worth living is going to have risks.’”

In the third book in the Bloodlines series, Sydney finds herself torn between her duty to the Alchemists and her desire to make her own choices. She begins to discover the truth behind the Alchemists and comes across Marcus Finch, an ex-Alchemist who wants Sydney to join his group of rebels and run away from the Alchemists like he did. At the same time, Sydney finds herself learning magic from her teacher in order to protect herself and other girls with magical abilities from an evil magic user who wants to steal their power.While dealing with her distrust of the Alchemists and her hesitation to use magic, she is also conflicted about her feelings for Adrian, who makes no secret of his feelings for her.

I think each of these books has been better than the last so far. The less uptight Sydney becomes, the more I like her. She really won me over in this book, mainly because she really started to learn how to use magic to protect herself and finally realized how much control the Alchemists have over her and that she doesn’t want that. She starts to finally take control of her life and make her own decisions, and she also starts coming to terms with her feelings for Adrian.

In this book Sydney meets Marcus Finch, who right away wants to help Sydney break away from the Alchemists. I was happy that she was finally starting to realize that the Alchemists are not exactly the people she thought they were, but I was glad she didn’t immediately trust Marcus also. Sydney becomes torn between living the life she was raised to lead, or starting a new life for herself. What I really love about Sydney though is that she is a very selfless person–she really cares about protecting Jill and doesn’t make any decisions without considering her first.

Jill and Eddie seemed to fall more to the background in this book, but I still think that Jill seems to be getting more mature with each book. She gives Sydney a lot of good advice and it seems like she’s finally starting to realize how much Sydney sacrifices to keep her safe. There were some really great Sydney and Adrian moments in this book, and I love how they each bring out different qualities in each other. Sydney really brings out the best in Adrian, and Adrian makes Sydney more confident and helps her to start putting her own needs first more often.

Overall, The Indigo Spell was a great book with tons of sweet moments between Sydney and Adrian and an ending that I absolutely did not see coming. The next book should definitely be interesting!!

The Indigo Spell was released on February 12, 2013 and is the third book in the Bloodlines series. The fourth book, The Fiery Heart, will be released on November 19, 2013, and apparently will feature Adrian’s point of view also!!

One thought on “The Indigo Spell by Richelle Mead”