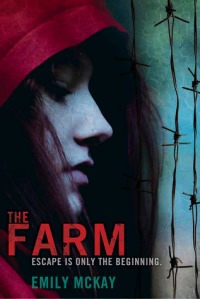 “They are as pitiable as they are inhuman. They are fear personified. Their emotions and minds given over to rage and hunger.”

Six months ago, people began turning into blood sucking monsters called Ticks. They rampaged the country, devouring anyone in their path. It was discovered that the Ticks preferred the blood of teenagers, so the government began gathering teenagers and placing them in Farms–fenced in prisons that not only keep them in one place, but raise them like cattle as food for the Ticks. Lily and her twin sister Mel have been living in a Farm in Texas for months, but Lily thinks that her sister has finally figured out a way to escape. As Lily begins to gather their supplies, a former classmate named Carter appears at the Farm, offering them help and information and arousing suspicion in Lily.

The Farm is a very different take on vampires, which to me was very refreshing! I am definitely over the whole vampire thing, but not when they are reinvented the way they have been in The Farm. The Ticks are not even really vampires, but some sort of a warbled version of a vampire. The real vampires are able to blend into society and appear human aside from the fact that they suck blood and are much stronger. The vampires are caught up in a political struggle to take control of the United States, and are using the humans as pawns.

I really loved the loyalty that Lily had for her sister. Her twin sister Mel is autistic, and has become more introverted and childlike since they were placed on the Farm. Lily takes care of her and is willing to do anything to protect her, but at the same time she knows how smart her sister is and doesn’t insult her by treating her like anything less than her equal. I loved the dynamic between the two sisters and the way they are both able to understand each other better than anyone else. Once they escape from the Farm, Lily has no other wish than to keep her sister safe, even though Carter has a different plan in mind.

The one thing that really bugged me about this book was the type of narration. The novel is told in chapters with alternating points of view, going back and forth between Lily, Mel, and Carter. This type of narration is not my favorite, but when it works, as in Through The Ever Night by Veronica Rossi, I don’t mind it at all. However, in The Farm, while it gives us a little insight into Carter and Mel’s mind, I still didn’t see the purpose of the narration being from anyone other than Lily’s perspective. What bugged me the most though was that whenever it switched to Carter’s point of view, the narration switched from first person to third person, which was another move that just did not translate well and in my opinion, disrupted the flow of the chapters.

Overall, The Farm was an exciting read with a very original take on vampires. It was also a beautiful story about the love between two sisters and the lengths they will go to in order to keep each other safe. I would definitely recommend this one to anyone who is tired of the traditional vampire story!