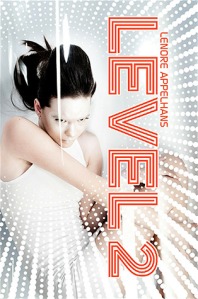 “There has to be more to death than this.”

Felicia Ward died the day before her eighteenth birthday. She is trapped in Level 2, an afterlife where she lies in a pod and relives the memories from her life over and over again. When the boy who broke her heart breaks in to find her, he tells her that he is part of the rebellion to bring down the Morati–angels who are keeping everyone trapped in Level 2. He tells her that if she helps him then he will do something for her in return: he will bring her to Neil, the boy she loves.

This book had such an original concept. The way all of the people in Level 2 were trapped in pods reminded me a bit of The Matrix, but instead of being trapped in a fake reality, everyone in Level 2 was trapped within their own memories. They could resurface for awhile but soon had to return to their pod and “plug in”. The way the memory network worked was very interesting and was almost like an afterlife’s version of social networking. Each person could choose to share their memories on the network and as people viewed their shared memories, the owner of the memories would earn credits that they could use to purchase other people’s memories for viewing. Felicia’s most precious memories are the memories of her boyfriend Neil, which she keeps private and views over and over.

What was really interesting about Level 2 is that it mixes genres. It is a dystopian novel set in the afterlife, but Felicia’s memories from Earth are strictly contemporary. The story is told from Felicia’s perspective in Level 2, but it is interspersed with memories from different parts of her life. Through her memories, we see the beginning and progression of her relationship with Neil, the effect her relationship with Julian had on her future, and each moment right up until the end of her life. The memories are viewed out of sequence so we don’t get all of the answers at once, and there is a great deal of suspense right up until the end of the book.

Overall, Level 2 was an incredible debut with an original concept, an engaging and suspenseful story, and a beautiful ending. This was a powerful first book and an excellent start to an exciting new series.

Level 2 was released on January 15, 2013 and is the first book in The Memory Chronicles. The second book in the series, Level 3, is expected to be released in 2014.