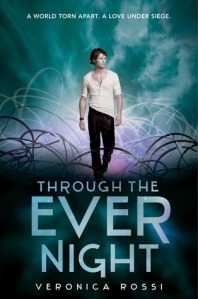 “Love is a rebellious bird that nobody can tame.”

In this sequel to Under the Never Sky, Aria and Perry finally meet again after being apart for months. Both face difficult situations–Perry has taken over as Blood Lord of the Tides and Aria is tasked with finding the Still Blue in order to bargain for Talon’s freedom. Aria is still trying to figure out where she belongs in the world outside of Reverie, but when she goes back to the Tides with Perry she feels more out of place than ever. With an increase in the frequency of Aether storms, Aria realizes that the only way to save both the Tides and Perry’s nephew is to find the Still Blue on her own.

I was a big fan of the first book in this series but I can honestly say that Through the Ever Night was even better! Aria and Perry each face an entirely different situation in this book that not only tests their strength but also tests their belief in each other. The dual narrative worked especially well in this book because Aria and Perry were apart for about 90% of it. It was interesting to see the completely different things they were going through but how it affected each of them in similar ways. Both are dealing with loss–Aria is still trying to get over the loss of her mother and Perry is trying to get over his brother’s death by his own hand. They are also both dealing with doubts they have about their relationship. Aria finds it hard to believe that with all of the differences between them that they will ever be able to really be together, and Perry doubts Aria’s belief in him after she leaves him behind to go in search of the Still Blue.

I really loved how everything was far from perfect when Perry became leader of the Tides. It was very realistic of any change of government–Perry faces a lot of dissension among the Tides, especially once he brings Aria into the picture. Many members of the tribe still believe that Perry’s brother made a better leader and deliberately go against any ideas that Perry comes up with. He has to do a lot to prove himself to the tribe before he earns their trust. This really makes Perry grow up even more than he already has and he realizes that he has an entire tribe depending on him to save them.

One of my favorite characters is definitely Roar and I was really glad that we learned much more about him in this book. He accompanies Aria on her journey north because he is still in search of Liv. We learn more about his and Liv’s relationship along the way and it becomes evident what an extremely loyal person he is, not only to Liv and Perry but to Aria as well.

Overall, Through the Ever Night was an amazing sequel with fantastic character development, incredible world building, and an ending that left me eagerly anticipating the next book!

Through the Ever Night was released on January 8, 2013 and is the second book in the Under the Never Sky series. The third book, Into the Still Blue, is expected to be released in 2014.

2 thoughts on “Through the Ever Night by Veronica Rossi”