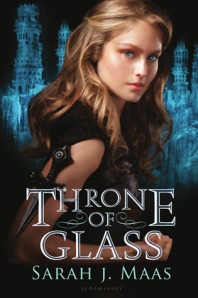 “My name is Celaena Sardothien,” she whispered, “and I will not be afraid.”

Throne of Glass is a debut novel for Sarah J. Maas and what an incredible debut it is! It is a fantasy YA novel about a young assassin, Celaena, who has been serving a prison sentence at a salt mine for the past year. She is called before the Crown Prince who offers her a chance at freedom. The catch? She has to participate as his champion in a contest to find the king’s new royal assassin. 18 year old Celaena must fight against other assassins and criminals (all men) and eliminate them all in order to win the competition and her eventual freedom. Once Celaena is living in the castle the prince begins paying extra attention to her, a girl different from any other he has ever met. But she is also drawn to Captain Westfall, who is the captain of the guard and her trainer in the competition. Soon after the competition begins however, a fellow competitor ends up brutally murdered. As more competitors fall victim to the unknown killer, Celaena must search for the killer before she becomes a victim herself.

This book had everything: sword fighting, political turmoil, romance, and a kick ass heroine. Celaena had a fantastic humor and spunk that made me like her immediately. She is strong and independent and able to defeat men twice her size. However, under her tough exterior she has a softer side that is still suffering from the wounds of her past. She lost her parents at a young age, trained as an assassin most of her life, and was forced to work as a slave in a salt mine as punishment for a year. But what I love about Celaena is that she doesn’t let any of that wear her down because she is determined to achieve her freedom in order to live her life the way she wants.

I loved the fantasy elements and the romance in this book. It’s rare to find a book that has magic, a ruthless competition, a murder plot, and romance all in one (other than Harry Potter of course), but Throne of Glass delivers all of that and more. I can honestly say that this is one of the best books that I have read this year, and is definitely the best fantasy book I’ve read in awhile.

Throne of Glass was released August 7, 2012 and is the first of a series. The author also has four published novellas available on the Kindle for those of us who are already craving more!

2 thoughts on “Throne of Glass by Sarah J. Maas”